What are Straight-Line Winds?

Recently, we’ve been hearing a lot about tornadoes throughout the Midwest, South, and Southeast. It’s true that this year has seen some unusually high numbers of tornadoes. They have caused millions of dollars of damage and heartbreaking loss of life. However, there is another type of wind damage that gets a lot less press but can be just as damaging as twisters. Straight line winds are, as the name implies, winds that blow in a straight line. they are basically the opposite of a tornado. But straight-line winds can do just as much damage, or even more. So we’re here for some straight talk about straight-line winds, to clear the air and set things straight. 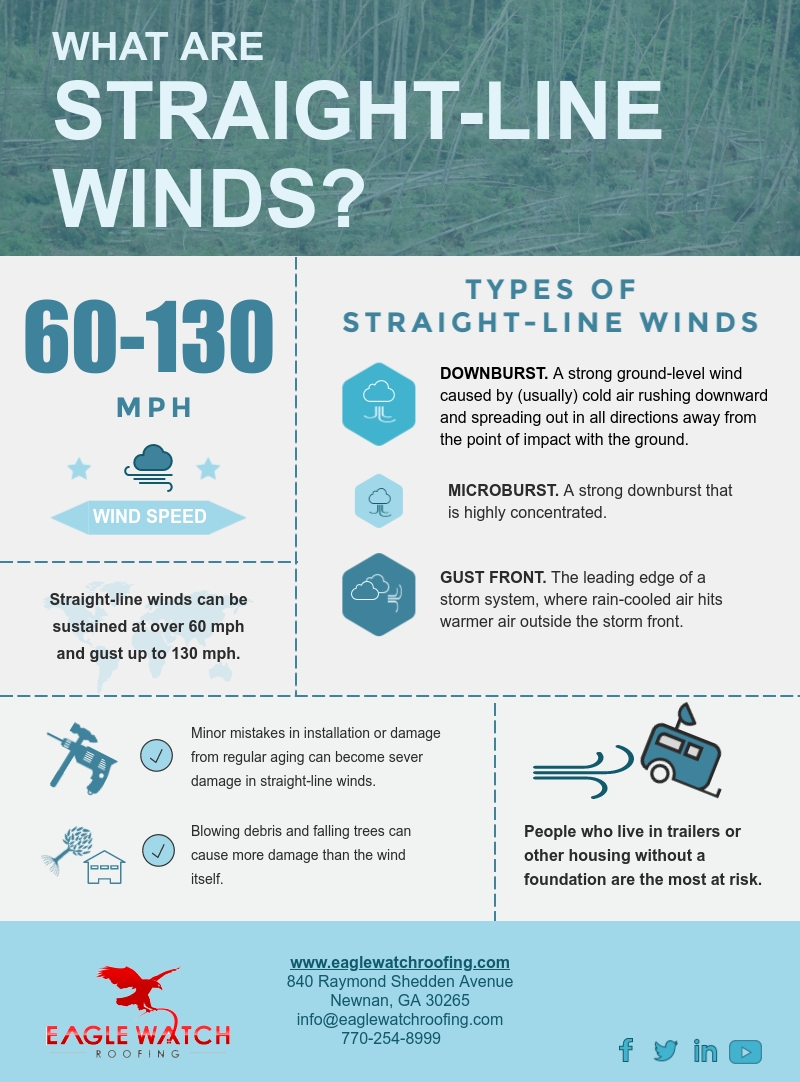 If your home has been hit by straight-line winds, you may not know what it’s called, but you’ll know something bad happened. The damage is often severe, rivaling a hurricane or tornado. If straight-line winds have ravaged your neighborhood, you and all your neighbors could find themselves looking roofers in Newnan, GA to repair all that damage.

Straight line winds can occur in several ways, but they are generally associated with thunderstorms or a storm front. Depending on the type of thunderstorm and what is causing the winds, straight-line winds can last for anywhere from 20 minutes (in the case of downburst) to many hours or, on rare occasion, days (in the case of a derecho). So while the winds speeds may not always reach tornado levels, the damage can be just as severe and often more widespread.

Sustained straight-line winds can blow at 60 mph or more (for comparison, hurricane winds blow at least 74 miles an hour), though gusts can reach 130 mph and can wreak havoc on a roof or even an entire structure. This type of wind has been known to lift gutters, loosen flashing, and rip off roofing panels. Tree limbs can crack, and even whole trees can be uprooted. Flying and falling debris can cause severe damage to roofs and structures. So if your area has experienced straight-line winds, you may be in for some repairs or at least a preventative inspection for damage.

Reports of damage from straight-line winds are more common than reports from tornadoes. Sometimes, wind speeds can exceed 100 miles per hour and leave a swath of destruction extending for hundreds of miles.

Who is at Risk?

Straight line winds tend to result from processes in thunderstorm systems. So if you live in a thunderstorm-prone area, you are more likely to experience damaging winds. But the type of dwelling you live in can also affect potential catastrophe. For example, people living in mobile homes are more likely to be injured or killed by straight line wings than people in more solid homes.

Possible Damage to Your Roof

What to Do After Straight-Line Winds

If straight-line winds have hit your home, you may have some severe damage to your roof. Some damage may be highly visible from the ground. Ripped-up patches of roofing or large fallen tree limbs will be obvious. But even if you don’t see any damage from the ground, it pays to have your roof inspected. Damage to shingles or flashing that is only visible from the roof could nonetheless put your home in serious danger. Hard-to-spot leaks and small penetrations can lead to extensive and expensive repairs. To avoid any problems, contact Eagle Watch Roofing for an inspection any time you have seen a weather event that could have damaged your roof.