Get Your Home Ready For Fall Storms

Fall and spring storms seem to be getting worse as the years go by. Storms can even be year-round. Storms are especially popular in the spring as well as fall. They can wreak havoc on your home.

Though we do not get a lot of snow here in this part of Georgia, we do get some. A late autumn storm that comes with wind-driven freezing rain can be particularly damaging to your home. Falling trees and tree limbs are capable of causing catastrophic damage. Your local Peachtree City roofers, Eagle Watch Roofing, offer this checklist to help you get your home ready for fall storms.

Some other tips we recommend include:

Ice dams are most common in winter. Tree branches can break when frozen, even if there are no strong winds. As snow melts and freezes repeatedly, ice dams form. Ice and water shields can be an effective option to protect your roof from ice dams. Ice and water shields are underlayments that go under your roof as protection. The underlayment is the first protective barrier on your roof and is often made of saturated felt with tar. This can be done by closing around nails in the rough to serve as a barrier and water sealant. It is recommended to cover the whole roof with water and ice shields for full protection against hurricanes and other storms.

Our experts from Eagle Watch Roofing can help install the protection your roof needs. Emergency preparedness means adding important and trusted contacts to your phone – including home service companies like roofers! It also helps to write them down in case of emergencies. 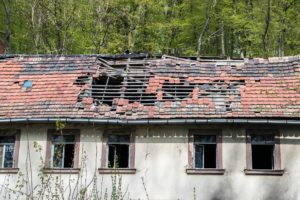 Why Protecting Your Roof Matters

Protecting your roof is very important to protect yourself and your loved ones from different natural disasters. Your roof can take a beating during storms. It is open and exposed to all the onslaught that fall, winter, and all-season storms can bring. Plus, it can leak around vent pipes, chimneys, attic fans, and satellite dishes. Falling limbs from nearby trees can tear shingles loose or break tiles. Spring and fall are the seasons when roof damage and leaks can be the worst. Both seasons come with plenty of wind and precipitation. Take care of the things that you can to get your house ready for storms, knowing that your Peachtree City roofers are here to help you fix any roof damage caused by all types of storms and fires.

What Can Cause Major Damages to Your Roof?

As mentioned previously, trees can cause much damage to your roof. Other risks for roofing damage are from roof debris, downspouts and gutters, creatures, rain and hail, wind, ice and snow, flashing damage, UV rays, and moisture. Preparing your roof for possible harsh and damaging weather is important and quite similar for all seasons.

Roof debris is caused when foliage and trees pile up on your roof. If this foliage and debris stick in the crevices of your roof it can cause shingle deterioration and leads to a rotting roof. Therefore, cleaning out the debris consistently is very important. If debris is not cleaned out, your gutters will fill with debris that can leak water throughout the roof. If the water leaks consistently, your roof will begin rotting.

Debris will attract creatures to your roof. Some of the animals include raccoons, birds, wood beckers, bats, mice, rats, and squirrels. These animals can damage your roof, as well as insects. These insects may hide under your shingles and fascia boards, which attracts these animals that are trying to find the insects. The animals can damage the roofs by tearing the shingles and vent covers.

Rain and hail damage protective coatings for the asphalt shingles. Therefore, using alternative and stronger types of shingling that can protect your roofs, such as metal shingles and clay shingles, may prove more feasible in Georgia’s climate and weather. This can lead your roof to be more susceptible to damage from UV rays, hail, rain, and moisture. You can check for hail damage by searching for dents in the shingles, as well as check to see if there are missing pieces of the shingles on the roof or remnants of shingles on the ground. If so, it is important to address it right away to prevent a domino effect of further damage.

Harsh winds can damage your shingle roof by lifting and blowing away the shingles. Therefore, after this severe weather making sure to search for escaped shingles is important, so you know whether it is time to hire someone, such as experts at Peachtree City Roofers, to fix the damages on your roof.

When your flashing is damaged, water sneaks into the house. Eventually, the sealant for the flashing may dry out and lose, causing water damage. Roof flashing is a thin strip to protect the vents, edges of the roof, and chimneys around your roof by weather-proofing the roof.

Ice and snow can cause much roofing damage as well. Though temperatures may not drop below freezing often in Georgia, when it does, the damage can be extensive. When ice freezes, it causes snow to stick and freeze. The pattern of freezing, thawing, and melting can cause the snow to melt into your home.

UV rays can cause damage to your roof over time because they can dry out shingles. This is normal but is why it is also important to check your roof regularly or hire a roofing expert, such as Eagle Watch Roofing, to inspect your roof.

Moisture also severely damages your roof, as mentioned above. Moisture damage is a side effect of not taking care of your roof from possible damages mentioned.

But no need to worry because Peachtree City Roofers are here to repair the damages that these natural disasters and critters may cause!

Throughout Georgia’s history, there has been a myriad of storms. There have been tornadoes, flooding, hurricanes and tropical storms, and winter storms. Other natural disasters that affect Georgia are wildfires.

Within the past second half of the century, Georgia has suffered from over 1,450 tornadoes. Just in the year 2013, 25 were reported. The most common months of the year for tornadoes are March, April, and May. Though, they still can occur the rest of the months. In fact, in 2013, the northern parts of Georgia suffered from an EF3 tornado that injured 17 people. In March 2012, Georgia had $12.64 million in storm damages from eight tornadoes that rumbled through Georgia within three days. In March 2008, Atlanta suffered approximately $500 million in damages within 24 hours. Many important structures were damaged, including the Georgia Dome, the Georgia World Congress Center, and the CNN Center, among other buildings in Georgia’s city center. Another dangerous month of March brought tornadoes in 2007. The 21 tornadoes hit the southern, middle, and eastern parts of Georgia. The state suffered nine fatalities, with almost one hundred citizens injured and hundreds of millions of dollars worth of damages. Sumter Regional Hospital was attacked by a tornado that had winds that were up to 165 miles per hour. Another momentous tornado occurred in February 2003, where six people were killed and approximately 200 injured from two tornadoes. Over 300 homes were damaged or lost. In 2000 three other tornadoes killed 21 people.

Many people are unaware that floods are the most common natural disasters that cause massive damage in Georgia. September 2009, there was nonstop rain that caused 500-year floods. These floods resulted in over ten mortalities and approximately half a billion dollars in damages. For example, 23 counties were given Federal Disaster Declarations because of the extensive damages and loss of approximately 20,000 homes and a myriad of businesses. Previously in 1998, 119 counties were affected by floods.

In August 2005, Hurricane Katrina attacked Western Georgia, and even once Katrina left, Georgia suffered even more from the most-ever hurricanes hitting Georgia at once. The 18 tornadoes destroyed many homes out of the already rubble and led to two fatalities. In September 1999, Hurricane Floyd reaped the most amount of panic in the United States with the highest evacuation effort in US history. Georgia was not the only state affected, with Florida, South Carolina, and North Carolina hit hard as well. Three million people were evacuated to safety.

An infamous tropical storm was Tropical Storm Alberto. Alberto increased rain to 25 inches within 24 hours, which caused 34 fatalities and over 50,000 displacements. Over 400 coffins were even raised out of the ground due to the torrential storming.

Winter storms can cause a multitude of dangers for Georgia residents. For example: in January 2014, those in northern and central Georgia were trapped by a snow and ice storm. Thousands of Georgian residents were even trapped in their cars, many for at least twenty hours. Over 1,500 accidents were caused by winter storms that injured at least 180 people. In February 2014, another stronger storm left the most ice in the north and central Georgia than ever seen yet. This caused at least 200,000 residents in Georgia to lose power.

Another storm in January 2011 stopped transportation in much of the state for five days. This affected 70% of Georgia residents. In 1993 a blizzard left at least four inches of snow in the Atlanta metropolis that closing off the region for almost three days. 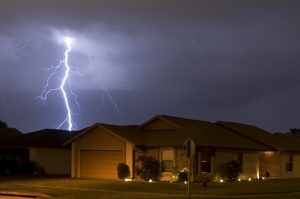 On June 11, 2022, lighting ignited a wildfire that burned hundreds of acres of land in Georgia. This fire threatened historical sixteenth-century Spanish archaeological sites and missions. St. Catherine’s Island lost approximately 15% of its land to wildfire. The drought in Georgia escalated, and the lightning-caused fire.

April 2007 brought a wildfire, which caused the largest and most damaging wildfire in Georgia’s history. This was caused after a power line fell and lit the forest floor in southern Georgia on fire. Eighteen homes were destroyed in both Georgia and Florida, with almost 564,000 acres of land destroyed. Over 3,300 firefighters from 44 different states, Canada, and even Puerto Rico fought against the horrendous fire. Wildfires can damage your shingling because the extensive heat can wear down the roof, especially asphalt shingles. Wildfires are not only caused by lightning strikes, but excess runaway embers from fires can easily light your roof on fire if not protected with the proper shingles material. Leaving debris can also increase the chances of embers lighting your roof on fire. Slate is an example of a fireproof shingle, while metal and fiber-cement shingles are fire retardant. Clay shingles are non-combustible, which means the escaped embers from fires will not catch your roof on fire. To install these fire-safe shingles, contact Eagle Watch Roofing for an upgrade. .

Why does Georgia Get These Storms?

As weather changes in Georgia, the chances of storms and natural disasters increase. This is because of the changing and warming temperatures in spring, as well as the increase of windy jet streams.

Stay Safe No Matter the Season

Keeping your roof at its best is vital to keeping your loved ones and possessions safe in the face of storms and natural disasters. This is why roofing professionals Eagle Watch Roofing are here to help you keep your roof safe, whole, and at maximum capacity to protect your home.