Factors to Consider When Buying a Home With a Slate Roof

So you have found a lovely home with a gorgeous slate roof. In many cases, this will be a historic home. The roof is beautiful, but you are concerned because you have heard that slate roofs can be expensive to repair and replace. And you are right to be concerned. Slate is a very high-end roofing material. It is prized for its unique look and historical beauty, plus it can last for centuries if well maintained. But before you sign the papers, there are some factors to consider when buying a home with a slate roof.

All About Slate Roofing

So, first things first: what is a slate roof? Roofing slates are an exceptional roofing material made from slabs of stones. This roofing material is known for being long-lasting and aesthetically appealing. In fact, many try to copy the design of slate roofing with a type of rubber roofing or asphalt roofing. However, the rubber and asphalt roofing do not compare to the strength and durability of the true slate roofing and its form. The slate slabs are quite heavy, which contributes to the resiliency of the roofing material. Slate roofs are fire and burn resistant, while also having a high tolerance to a large range of hot and cold temperatures.

A Little Bit of History

An abandoned slate quarry in the UK

Slate roofing has been around for over 700 years. The earliest records of slate roofs date back to England and Wales in the 14th century. Since the roofing material was so expensive, only the wealthy utilized the slate tile on castles and grand estates.

Slate roofing grew in popularity in Spain, as well, where they collected the material in a more financially reasonable manner. Thus, it could be used in the construction of the average home. Slate was first used in the United States in the 1800s, again mostly by the more wealthy homeowners. Slate was most commonly found in Vermont with unique coloring. In the past, slate was also used for sidewalks and walls of buildings.

Where Do You Find Slate and How is it Formed?

Compared to other rocks, slate is easy to cut and shape into sheets of slabs, yet is still very durable. Other rocks may not be hard enough to protect a home or too hard to shape into slabs. Slate is workable, durable, and attractive. 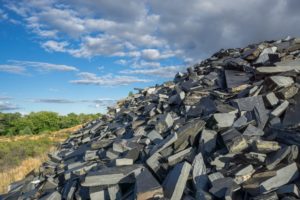 Slate stones piled high at a mine

The slate material used in roofing has a low environmental impact since it is completely natural. It does not have any chemical emissions and can be easily reused and recycled. Building slate roofing does not use unnatural chemicals and building materials, therefore, holding a low carbon footprint. For many people, this makes slate especially appealing as an eco-friendly roofing alternative.

Buying a Home with a Slate Roof: What is the Current Condition?

First of all, congratulations on your consideration of a home with a slate roof. You have already avoided the most costly part of owning a slate roof: the installation. But like any home, it is important to consider all aspects of the home’s current condition. This is especially true of the roof, as well.

A well-maintained slate roof can last for hundreds of years. In fact, many slate roofs are still sheltering homes that date from the 19th century and earlier. The biggest factor in owning a home with a slate roof is maintenance. You can think of maintenance on a slate roof like maintenance of your dental hygiene. Slate roofs, like your teeth, can and should last a lifetime.

Slate is a natural stone. Thus, it is impervious to much of the rot and other damage that can slowly eat away at other types of roofs, such as wood or asphalt shingles.

However, problems can still arise. Just like you may get a small cavity in a tooth, a slate roof may have one or two tiles that become damaged or cracked. While the damaged tiles may not immediately result in a leak, leaving them in disrepair would be like leaving a cavity unfilled. The damage is likely to spread. And as the damage spreads, the repairs become more costly, and the overall harm is much worse.

The easiest and cheapest bit of maintenance is replacing one or two damaged slates. The repair can cost as little as $50 or as much as a couple of hundred dollars but rarely is it more. Broken slates should be replaced as soon as they are noticed to avoid spreading damage.

There are several ways to replace a broken slate. The first thing to be done is to remove the damaged slate. To do this, the roofer will use a ripper, a long, flat, metal tool with a slightly wider bit on top that can act as a hook to catch a nail. The roofer will slide the ripper up under the damaged slate, keeping the ripper flat and parallel to the roof to avoid damaging any other slates. Then they will use the hooker to latch onto the nail holding in the broken slate and tap the ripper with a hammer until the nail pulls loose. The slate can then be carefully slipped out and removed. 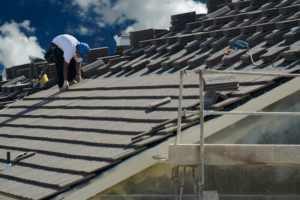 Once the slate is removed, a new slate has to be installed. This can be done with a hook or with a nail. If a hook will be used, a small hook is hammered directly into the sheathing where the slate has been removed. The new slate is slid into place, with its upper portion sliding under the slate above it. The bottom of the slate is then rested on the hook, which holds it in place.

If the slate is going to be nailed, the roofer must first make a small hole for the nail. Using a pin tool, the roofer breaks a small hole in the area where the two slates above the missing one meet. The new slate is slid into place, and a nail is hammered into the slot between the two upper slates, going into the small space that was opened for it. Then, a small sheet of copper or stainless steel is slipped into place on top of the new slate and underneath the slate above, covering the newly installed nail.

Replacing Flashing on a Slate Roof

One of the weak points on any slate roof is the flashing. Flashing is sheet metal that is used for waterproofing areas prone to gathering water or leaking. These include valleys and the areas around chimneys, vents, skylights, or other openings in the roof. Depending on the material used, flashing can last up to 75 years or as little as 15 to 20 years. In any case, this is usually less than the lifetime of the slate. So it’s good to keep in mind that while slate lasts centuries, the flashing will have to be replaced before the rest of the roof.

A well-cared-for slate roof should only need the minor repairs mentioned above. But if a roof has been neglected, it may require restoration. This is more common in historic homes that are stretching into the century-plus age range. Restoration is really just a more extensive type of repair. It may include fixing a large number of slates. It can also mean replacing flashing or fasteners, or both. If you purchase an aging historic home in the hopes of fixing it up and returning it to its former glory, it is likely the roof will need some work, too.

The general rule with restoration is that it should only be undertaken if 70% to 80% of the slates are still in good condition. The damaged slates should ideally be scattered around the roof. This would be the result of poor maintenance. If the damage is concentrated in one area of the roof, the damage may be more severe, and a full roof replacement could be necessary.

If more than 20% to 30% of the slates are damaged, most slaters will recommend a full roof replacement. At that point, you are faced with a tough decision. Do you install new slate, a costly proposition, or go with a different roofing material? A large part of this decision will depend on the type of house you have. If you are in a historic home, a large part of the value of the home is its slate roof. In that case, it may be unwise to use other more modern materials. In other cases, with newer homes, there are more options. If you like the look of slate but not the expense, there are modern synthetic shingles that replicate the look of slate. But for a historic home, that method would significantly decrease the value.

If you are purchasing a historic home, it may be good to save up for a roof replacement. Unless your roof is in great condition when you purchase it, replacement may be in your future. Of course, proper maintenance can delay or even prevent replacement. That’s why it is essential to have your slate roof inspected annually by a slater, a roofer who specializes in slate. You should never walk on the slate, so having an inexperienced roofer inspect your roof could do much more damage than good. But with regular maintenance and cleaning, your slate roof could last another century. If you are considering purchasing a home with a slate roof, check in with the professionals at Eagle Watch Roofing. We can help you assess the quality of the roof and determine any future problems that may arise.

Though slate roofing tends to be more expensive than other roofing materials, slate roofs prove more resilient and long-lasting in harsh weather conditions, such as storms and hurricanes, compared to roofing such as tile and asphalt. Slate is durable against such harsh weather conditions as it has a low water absorption index. Slate can last over 100 years, and the cost of maintenance and repair of slate roofing is low. Discoloration is uncommon, so it will be unnecessary to maintain the color of the roof. Hence, in the long-term slate proves to be economically feasible. If you are preparing to live in your house for a minimum of thirty years, slate roofing is worth the investment.

When needed, repairing a slate roof, though not very often, can prove somewhat expensive depending on the roof’s state. Slate roofs should last a lifetime. Therefore, if you are considering purchasing a home with a slate roof take into consideration the age of the home and roofing.

With slate being so expensive, it also means that slate has a high resale value. So, if for some reason you choose to change the roofing tile you can sell the tiles for a decent price. If you choose to sell your house, slate roofing can raise the worth of your house. Make sure to contact Eagle Watch roofing to see if slate roofing is the best for your home!